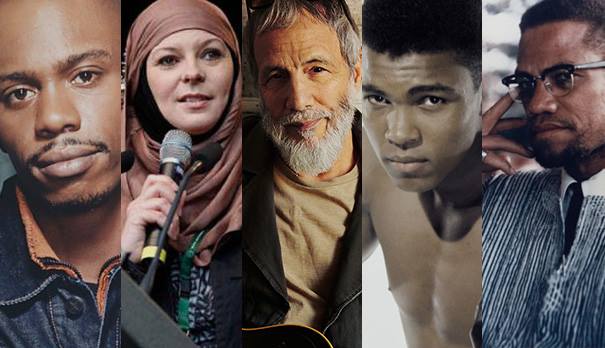 Five Things You Should Know Before Converting To Islam

I always suspected I was one of the best Muslims in the country. But it wasn’t until I was nominated for a “British Muslim Award” earlier this year, that I was officially able to confirm it to myself and to others.

There’s been a frenzy of speculation recently that Hollywood actress Lindsay Lohan has decided to become Muslim. If true, she’ll join the ranks of celebrity converts like Jermaine Jackson, Dave Chapelle, Cat Stevens and Mike Tyson.

Joining any religious community is fraught with culture shocks and the danger of committing unforgivable faux pas. As one of the best Muslims in the country – possibly the world – I’m in a strong position to give some pointers about what Lindsay can expect should she officially decide to join the faith.

1. Headscarves make you prettier. But only if you’re pretty.

Today is World Hijab Day, so let’s start with an inconvenient truth that always gets lost in the celebratory positivity. And it’s one you need to hear if you suffer constant paparazzoid harassment. Wearing the headscarf frames your face and really makes it “pop”. If you’re pretty then it accentuates your beauty. If you’re not, well then it accentuates all your least flattering features. And since, according to most orthodox interpretations, the headscarf is compulsory for women you’ll have to choose between looking your best and being faithful to your faith.

Common misconception: While the headscarf is the most visible form of Hijab, the term applies to both men and women. However, Hijab for men only requires they cover themselves from navel to knees (as a minimum).

2. Welcome to the world’s most OCD religion.

For Muslims, cleanliness really is next to Godliness, and was described by the Prophet Muhammad as “half of faith”. Ablution will suddenly become central to your very existence, as physical purity is a pre-requisite for prayer. And boy do we pray a lot.

The teachings of the Prophet Muhammad are explicitly anti-racist, and his final sermon made sure to re-iterate racial equality. So, you’d be forgiven for thinking Muslims abhor racism. You’d be wrong, of course. The Prophet wouldn’t have had to be so explicit unless beliefs in tribal and racial superiority were deeply ingrained in the culture. Anyone who’s spent time in the Persian Gulf will tell you there’s a very clear social, and often occupational, hierarchy based on race and nationality. Arabs at the top, naturally, with Filipinos, South Asians and Africans occupying the bottom rungs of the social ladder.

European cultures are considered morally deficient. But, thanks to colonialism, Arabs – many of whom erroneously consider themselves God’s chosen people – display an embarrassing inferiority complex when it comes to White people.

Meanwhile, over in the Indian subcontinent, Muslims still adhere to the ludicrous racially based Hindu caste system, and consider intermarriage between the castes to be undesirable. Whiter skin is unashamedly lauded as aesthetically exceptional. And most of my Pakistani and Indian relatives will openly declare they’d never sanction their children marrying a black spouse.

4. Almost every Muslim event is a charity sting.

Community is central to the Muslim lifestyle. And by “community” I mean the Muslim community. But only the bits of it that speak your language and/or share your ethnic background. The Muslim prohibitions on alcohol, drugs, pork, certain types of music, small talk with the opposite sex etc. have led to a cottage industry of Shariah-compatible events. Ostensibly, they exist to serve the demand for Muslim-friendly fun that mainstream entertainment fails to offer. In reality, they’re almost always a front for some pretty aggressive emotional blackmail by an Islamic charity.

Tickets will be cheap and, if you’ve never been before, you’ll wonder how they can afford to lay on lavish functions on such limited budgets. You won’t wonder for long. That concert, comedy show, cultural celebration or celebrity dinner will usually come to an abrupt halt halfway through. Then an imam will come on stage and spend the next hour (or even two) laying on the guilt pretty thick about poverty, destitution and world hunger, exhorting the audience to dig deep into their pockets in order to absolve themselves of their many sins.

Expect slick powerpoint presentations and heart-wrenching videos showing emaciated children, homeless and vulnerable, while the saddest hits from Muslim pop stars play at deafening volume. The audience will squirm uncomfortably as the priest points out how the assembled in their fashionable finery have no excuse to sit on their hands.

One by one the people in your neighbouring seats will stand and announce how much they’re willing to donate for the cause, putting huge pressure on you to do the same. It won’t be long before you’re on your feet and digging deep.

5. If you decide to leave Islam, we’re supposed to kill you!!

This is the bit that’ll never get mentioned when you’re being courted by the faithful. Apostasy is punishable by death. And, while it’s rare in the Western world, it’s not unheard of for people to be killed if they’re believed to have abandoned the religion. You don’t have to even explicitly declare your rejection of Islam. You can be assumed a heretic should you act in a way that’s considered offensive to the teachings of the Prophet, which then (in theory) makes it morally imperative for you to be slaughtered.

Jay will be performing his show Comedy Intifada at the Leicester Comedy Festival on Saturday the 25th of February 2017.