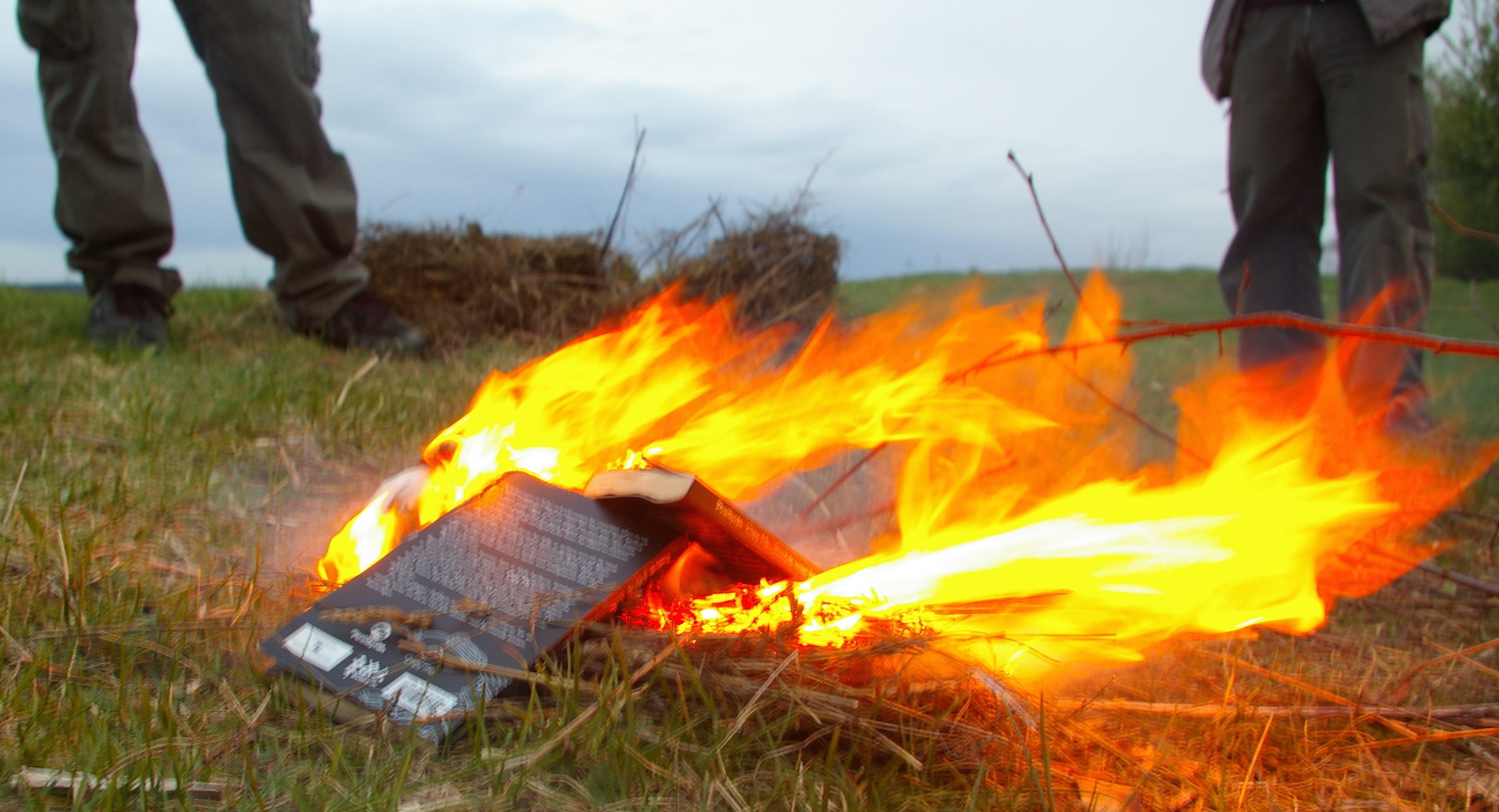 It’s one of the world’s most successful religions, with an estimated 1.5 to 2 billion adherents. Yet, thanks to misrepresentations of its tenets by its opponents, and by Muslims themselves, it’s a staggeringly misunderstood ideology. Even a cursory review of the Islamic belief system, versus how it’s perceived, shows a huge disconnect between what the scriptures say and what both Islamophobes and Muslims think the scriptures say.

What’s most astonishing is how many people, Muslim and non, see it as the brown-face equivalent of being Roman Catholic. But when you dig into the reality of what the Prophet Muhammad actually taught, orthodox Islam appears to be the very antithesis of Catholicism. In reality, Islam is more akin to being a Judaism 2.0.

Here’s just ten things you didn’t know about Islam. But what I’ve left out could probably fill a bumper-edition of the comedy quiz show QI.

1. Homosexuality Isn’t A Crime In Islam

An unusual opening gambit, I know.

You’ve probably heard of the public executions of gays carried out by ISIS. And in more than a dozen Muslim countries the punishment for homosexuality is death. Clearly, Islam, like Catholicism, hates the homos, right?!

Not exactly. You see, there’s a reason I put this one first as it’s about a fundamental differentiator between the world’s two most popular faiths. Catholics half-heartedly haul themselves to the confessional and admit their impure thoughts for absolution. However, in Islam, how you think and feel can never be a crime. Sinfulness is always about actions, never about desires and emotions. To put it bluntly, there is no such thing as Thought Crime in the Islamic doctrine.

Sodomy, however, is without question condemned, be it gay, straight or strap-on.

2. Being Transgender Is Totally Fine Too

While we’re on the subject of LGBT, did you know Iran is second only to Thailand in the volume of sex-change operations carried out? You can even get a government grant to part-finance the reassignment procedure. I should acknowledge here that, firstly, Iranian Islam isn’t considered “orthodox” and, secondly, this is possibly part of a strategy to ensure that, as ex-President Ahmedinejad claimed, “there are no homosexuals in Iran.”

Within more orthodox teaching, however, there is an acceptance that being transgender can be an innate quality, which carries “no guilt, no blame and no shame”. Learning this didn’t come as a surprise to me. As it likely wouldn’t for any Muslims with ancestral links to South Asia, where “Hijra” are overtly visible in the entertainment industry, and even fronting mainstream TV shows.

3. Contraception And Abortion Are Allowed

Continuing with the “Muslims aren’t Catholics” theme… Islam clearly proscribes non-marital copulation. Within a marriage, however, sex for pleasure is actively encouraged and, if done correctly, considered one of the many ways you can worship God!

Birth control has been explicitly accepted, if not exactly encouraged, by the Prophet Muhammad. The logic presumably being that God is in charge of creating life, and a broken condom is His way of imposing the burden/joy of children upon you at His whim.

Abortion is a much more contentious subject, but certainly accepted by all Islamic scholars in specific circumstances. However, it is worth noting that, according to the Prophet, a fetus isn’t considered a person for the first four months of its existence.

Abortions after about 17 weeks, unless carried out on medical grounds, are considered to be murder.

4. Muslims Were Cool With Evolution Centuries Before Darwin

Charles Darwin, wrongly, gets all the credit for first theorising about natural selection, when he wasn’t even the first Darwin to express those ideas! However, few realise how far back theories about evolution actually go. One of the first to broach the subject was an African polymath called Al-Jahiz, who was spitting rhymes about Black Power a whole millennium before Chuck D boarded the HMS Beagle.

Al-Jahiz was part of the rationalist Mu’tazila movement that challenged literal interpretations of scripture, and flourished for a couple of centuries not longer after the finalisation of the Quran. Unsurprisingly, nowadays, being a rationalist Mu’tazila is an insult hurled at their opponents by the strictly literalist jihadist movements.

5. Arabs Are Not Islam’s “Chosen People”

Spent any significant time in the Arabian peninsula? Then you’ll know the exceptional arrogance Muslim Arabs have about their own divinely-sanctioned superiority amongst all peoples. It’s understandable on the surface of it.

Adam and Eve, after their expulsion from heaven, were first reunited in Makkah. Abraham built the first house of God in Makkah. Abraham also took his son to the mountains of Makkah to sacrifice him, as per divine direction. The Prophet Muhammad was an Arab, born in Makkah. And the Quran itself is in Arabic and was first revealed in Makkah. (Gee, a lot of stuff happened in Makkah, huh!?) So, obviously, God really loves everything Arabian, and has a soft spot for Makkah in particular.

Errrr… no. Firstly, Muslims accept the divinity of the original Hebrew Torah and the original Aramaic Bible. Secondly, the Quran, God’s final and most important revelation, wasn’t a gift for a pious people. A virtuous nation doesn’t need guidance from God’s most favoured Prophet. It was because of their immorality, corruption, cruelty and injustice against the vulnerable that God deemed it necessary to deliver his most important message and messenger to Arabia.

That’s something Muslim Arabs conveniently forget when they’re looking down their noses at everybody else.

Christian Arabs and Jewish Arabs (yes, really), understandably, get left out of this supremacist sneering.

“Burning the Quran” is a favoured provocation of hate-preaching Islamophobes everywhere. And it’s effective too, as Muslim reactions can often be visceral and violent. Which is strange, because The Quran isn’t a book. It’s the revelation from God, i.e. the words themselves.

The written manuscripts that Muslims read from are actually called the Mus’haf – literally “the collection of pages”. And burning copies of the Mus’haf is something Muslims themselves do all the time. It’s considered the most respectful way of disposing of a copy once it’s reached the end of its useful life.

Still, that won’t stop us going bat-shit crazy if a mentally ill Christian does it!

Instead, Islam is adamant about the existence of Jinn (aka genies) – a sentient race of beings who exist as pure energy. Like us, they are gifted with free will and can choose to be either good or evil. They do have the power to take human or animal form, possess people and generally freak us out. Or they’re possibly just a convenient excuse to physically attack the mentally ill.

The Prophet Muhammad is said to have explicitly spoken out against astrologers, fortune-tellers, soothsayers, crystal readers, good-luck charms, superstitions and omens. Naturally, Muslims around the world indulge in each and every one of these forbidden practices, because… ignorance and hypocrisy.

More specifically, Muslims gave us the modern scientific method, all thanks to the Einstein-level genius of a 10th century polymath called Hasan Ibn Al-Haytham, better known in the West as Alhazen.

Prior to Alhazen, what we mistakenly assume was science would be more accurately labelled philosophy – a bunch of old men putting quill to parchment to construct logical arguments about the nature of our reality.

Alhazen, drawing on his Islamically-inspired skepticism, decided that without experimentation to prove a theory we could never know anything for certain. It was the rigorous methodology for substantiating hypotheses Alhazen developed that we now know as the experimental scientific method. Which, incidentally, has been responsible for every technological advancement made in the last millennium.

It’s the scientifically lauded, Doctor-approved, miracle weight-loss regimen of our modern era: the Five:Two diet. Yet it bears an uncanny resemblance to the dietary recommendations of the Prophet Muhammad, who advised his followers to fast on Mondays and Thursdays.

That’s it. I’ve nothing else to add on this one. To be honest, there are more than a dozen interesting, and much longer, facts I could have slotted in right here. So, why have I chosen a really short one? Because you’re going to need a breather before we move on to the next.

10. Muhammad, And His Disciples, Had Many Sex Slaves

The clash of civilisations between Islam and Christianity really kicked into gear when Christendom launched The Crusades, in response to the expansion of Muslim rule across the Middle East.

No doubt there were atrocities committed on both sides, but the Rules of War laid down by the Prophet Muhammad provided the Muslim side an historically accepted moral high ground. Rules that forbid the murder of women, children and non-combatants and banned soldiers from destroying their opponents’ livestock, agriculture and sources of water. There were also strict instructions about the treatment of prisoners of war. Essentially, Islam signed up to the Geneva Convention thirteen centuries before the West finally decided to bring some civility to state-sponsored mass murder.

About that though… the stories of Saladin’s army graciously freeing their new slaves following their conquest of Jerusalem – rather than slaughtering them, as the Crusaders did – are a genuine high point in Muslim history. But there can be no denying that slavery was an accepted part of the Prophet Muhammad’s new civilisation, and he himself was no stranger to keeping concubines as the spoils of war.

Until recently this aspect of the Prophet’s life was conveniently brushed under the carpet by Muslims who found it too embarrassing to admit, let alone discuss.

However, since the rise of ISIS and their use of Islamic teachings as a justification for the trafficking of captured women, it’s impossible to ignore the fact Muhammad – “the best role model” and of “the highest noble character” – not only sanctioned, but also participated in, the enslavement and sexual exploitation of captives. (Euphemistically referred to in the Quran as “those whom your right hands possess”.)

“Hey! It was a different time. Slavery was endemic. You couldn’t expect Islam to ban it immediately!”

Yet that’s exactly what the Quran did for boozing and gambling, which were also endemic, and according to tradition every Muslim immediately accepted the new rules.

“WTF, Jay? The start of your list reads like a liberal apologist propaganda piece for the religion and by the end you’re promoting Islamophobia? What gives? Whose side are you on?”

Surprise!! I’m not on anyone’s side. Thanks to my own peculiar brand of Autism, I have zero interest in pleasing anyone but myself. It’s joyfully liberating. And means I’m free to call it how I see it.

I’ve no interest in pandering to any particular group, promoting any particular ideology, or pleading for popularity. Because your opinion of me is worthless to me. It can be a really awesome condition. Believe me, you “normals” are missing out. 🙂