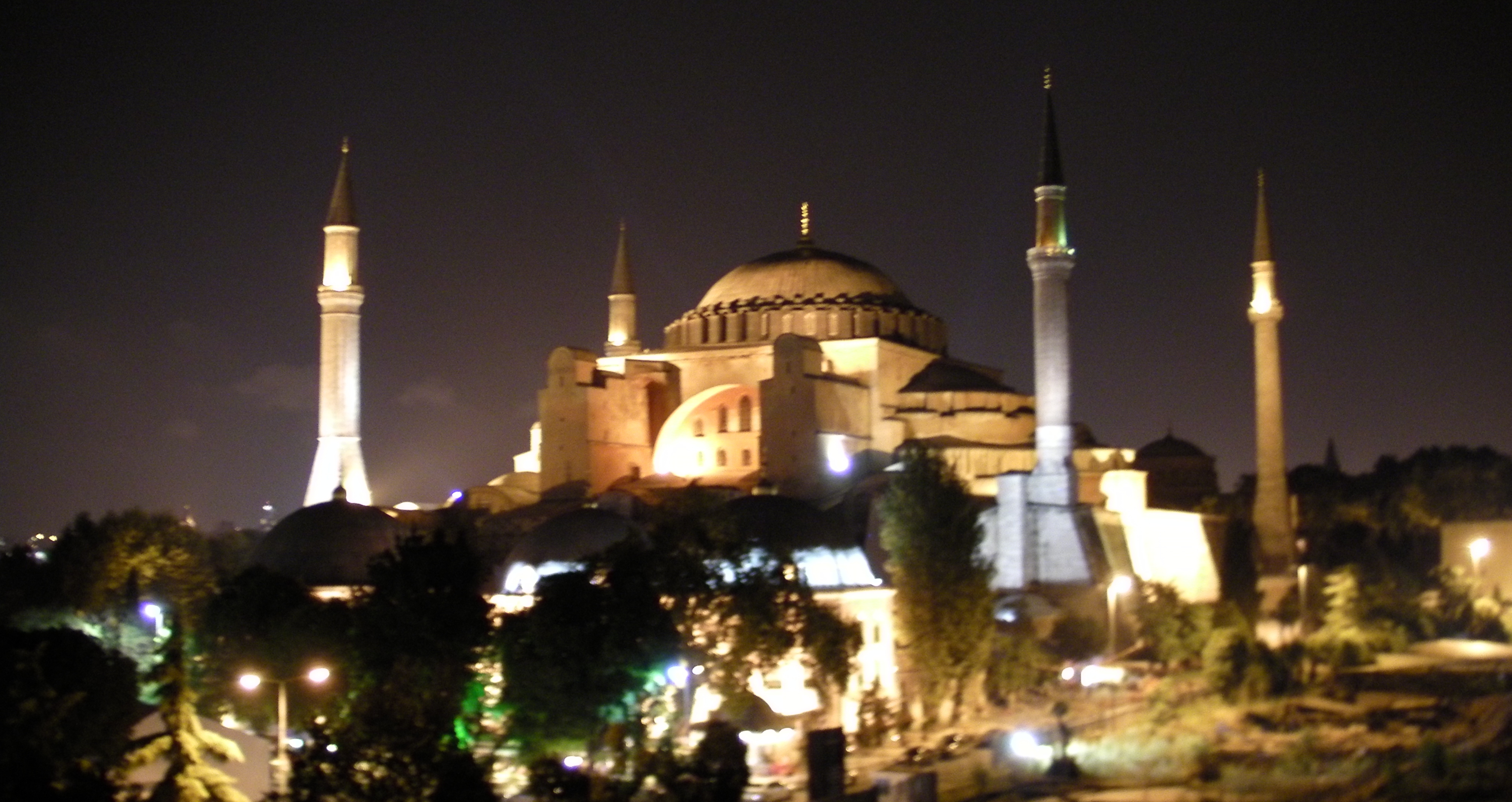 So I spent more than six months in 2010 living and working in Istanbul. Click here for more on that story.

I used what little free time I had to enjoy as much of the city as I could. However, I rarely took photos as I was too busy working or enjoying myself! Formerly known as Byzantium, and then Constantinople, modern Istanbul has historic buildings and locations galore. Most people only know about the tourist-heavy European side of the city. However, it stretches much further than the majority of visitors realise. Personally, I found the less popular Asian side of the city much more interesting and enjoyable. But very few tourists bother to make the crossing across the Bosphorus and spend some significant time in places like Beylerbeyi, Kadıköy and Üsküdar. In my opinion, they’re really missing out.

This was the view from my (temporary) home. I’ve travelled to many different places, but I don’t think I’ve ever seen any architecture as beautiful as this astounding building, The Sultan Ahmed Masjid. So I was quite happy that this is the view that greeted me as I woke up every morning. 🙂

The beautiful Sultan Ahmed Masjid at night, as seen from my balcony. My photography skills are not nearly good enough to capture its beauty. And you would need a talented poet to describe it to you, as I simply don’t have the skills of articulation required to do it justice.

The amazing Hagia Sofia (Ayasofya) as seen from my balcony. This building is more than 1000 years old. No that’s *not* a typo. One THOUSAND years plus it has stood in this spot. It was originally a cathedral – named for Saint Sofia – and later a Mosque and then converted to a Museum. After the post-Ottoman revolution took place in Turkey, about the 1960s, the anti-religious ruling party decided to remove the minarets as part of a wider plan to “cleanse” the country of anything Islamic. They were almost ready to tear them down. The equipment had arrived and the Minarets were due to be demolished… until someone pointed out that the Minarets are holding the building in balance and removing them would result in the whole thing collapsing! So they were forced to keep the Minarets. Pretty. Ain’t it?

Now that Ramadan has started, for Mosques with more than one Minaret, they’ve hung lights between them with messages on them. It’s so strange to see the city at dusk, when the Azan is called from the minarets, and all the tourists stop and admire the Blue Mosque in the moonlight. Many of them probably haven’t heard the Azan before and they seem mesmerised by the spectacle of it all.

I still haven’t been inside the Blue Mosque during the daytime. So I suspect I’ve not really had a chance to appreciate it’s majesty yet. Even though I’m usually just a hundred metres away from it most of the day, it’s just not possible to get away as we’re too busy with the project. Also, I know there are a lot of tourists passing through it throughout the day and I would probably feel a little uncomfortable about hundreds of strangers gawping at me while I pray.

Rooftop restaurant at my hotel was always busy. But, given the view, that’s hardly surprising.

Inside the Hirka Serif Cami (Hirka Sharif Mosque) in the Fatih district of Istanbul is, I’m told, the cloak/coat of the Prophet Muhammad (saw), some of his beard hairs and other relics.

It’s only opened up for a few days a year, in the last half of Ramadan, and for a few hours a day. However, the Imam of the Mosque was kind enough to give me a personal audience with the relics after it had closed to the public.

I guess I’m not particularly spiritual, as I wasn’t “moved” by being in the presence of these relics the way many others are. I was impressed though that these historic artefacts are more than 1400 years old.

No-one is supposed to touch the relics. They’re cleaned using special silk cloths. And I was given two of those cloths as a present from the Mosque’s Imam. Soon to be framed and put up on the wall.

One of the reasons I loved staying on the Asian side of Istanbul was that you could live in some beautiful hotels there for about the same price as many dingy and cramped places on the European side of the city.

The secluded Bosphorus Palace, on the banks of the sea and my temporary home. It’s in an area called Beylerbeyi, which roughly translated means “Lord of the Lords” (or “Regional Governor”). This building used to be the home of the “Beylerbeyi” many centuries ago and has it’s own private dock where the Pasha’s boats would be moored. It only has 14 rooms and at the moment I’m one of only 4 guests! So the ratio of staff to guests is pretty favourable.

Inside the Bosphorus Palace. All the rooms are ridiculously ostentatious. You really do feel like you’ve stepped back in time…

I’m not afraid of flying. I don’t have arachnophobia. I never really worried about heights. I’m not frightened by the crazy driving of the Istanbul taxi drivers… However, I DO fear the sea. I’m a land mammal and travelling over water has always made me very nervous. Yet THIS is the scene that greets me every morning. Climbing aboard a rickety little boat and chugging along (what seems like) the world’s busiest shipping lane, getting cut-up by million tonne oil tankers… but it’s the only way to get to work as the bridge is gridlocked and there is no undersea tunnel (yet).

The Bosphorus Palace has a restaurant underground, where you can look out across the water to Euro-Istanbul while you lunch. Originally, this was where the Sultan’s boats would come in and dock.

Fun at the football

I’d heard about how crazy Turkish football can be. Not just loud and passionate support, but matches regularly spilling over into violence. I was very kindly invited to attend an Istanbul derby match between local sides Fenerbahçe SK and Beşiktaş JK.

The noise as you approach the stadium is indescribable. You’ll never hear anything like it in the UK. It’s almost orchestral. As we drive by, small groups of Besiktas fans are herded into the stadium with a full police escort, armed with machine guns and tear gas. There seem to be more police than there are supporters!

Inside the stadium, the atmosphere is electric as supporters from both sides cheer and boo the names on the team sheets being announced over the PA. The announcer sounds like the most excited person in the whole stadium and the home side’s names are announced with flair and vibrato, much to the delight of the home supporters. We managed to get front-row seats on the half-way line. The ideal view if you are interested in the football. I was far more interested in the entertainment provided by the crowd.

As kick off nears the atmosphere rises to a fever pitch. Passionate supporters are screaming so loudly at the players that the veins on their foreheads are throbbing from their heightened blood pressure. Not a St. John’s ambulance man in sight though!

Ticker tape rains down on the crowd as the players prepare to kick off. Somehow the 1000 visiting Besiktas fans are outsinging the 40,000 home support and the hatred between these two sets of Istanbul football fanatics is physically palpable. Fireworks are catapulted from one set of fans to the other, back and forth. The stadium fills with smoke and projectiles are hurled at the pitch. The heavy security presence is ready for anything it seems as the police are here in full gear and keeping the rival fans apart with a phalanx of riot shields, batons and tasers. Compared to all this, the action on the pitch is a bit of an anti-climax…

The game ended Fenerbahce 1 – 1 Besiktas. It was the most amazing footy experience I’ve ever had! Never seen so much hatred at a match. Fans throwing fireworks at the players & each other!! I even saw a woman in hijab hurling abuse at the linesman! The highlight though was watching 1000 Besiktas fans out-sing 40,000 Fenerbahce fans. Probably a good idea that I chose NOT to wear my Villa top that day.