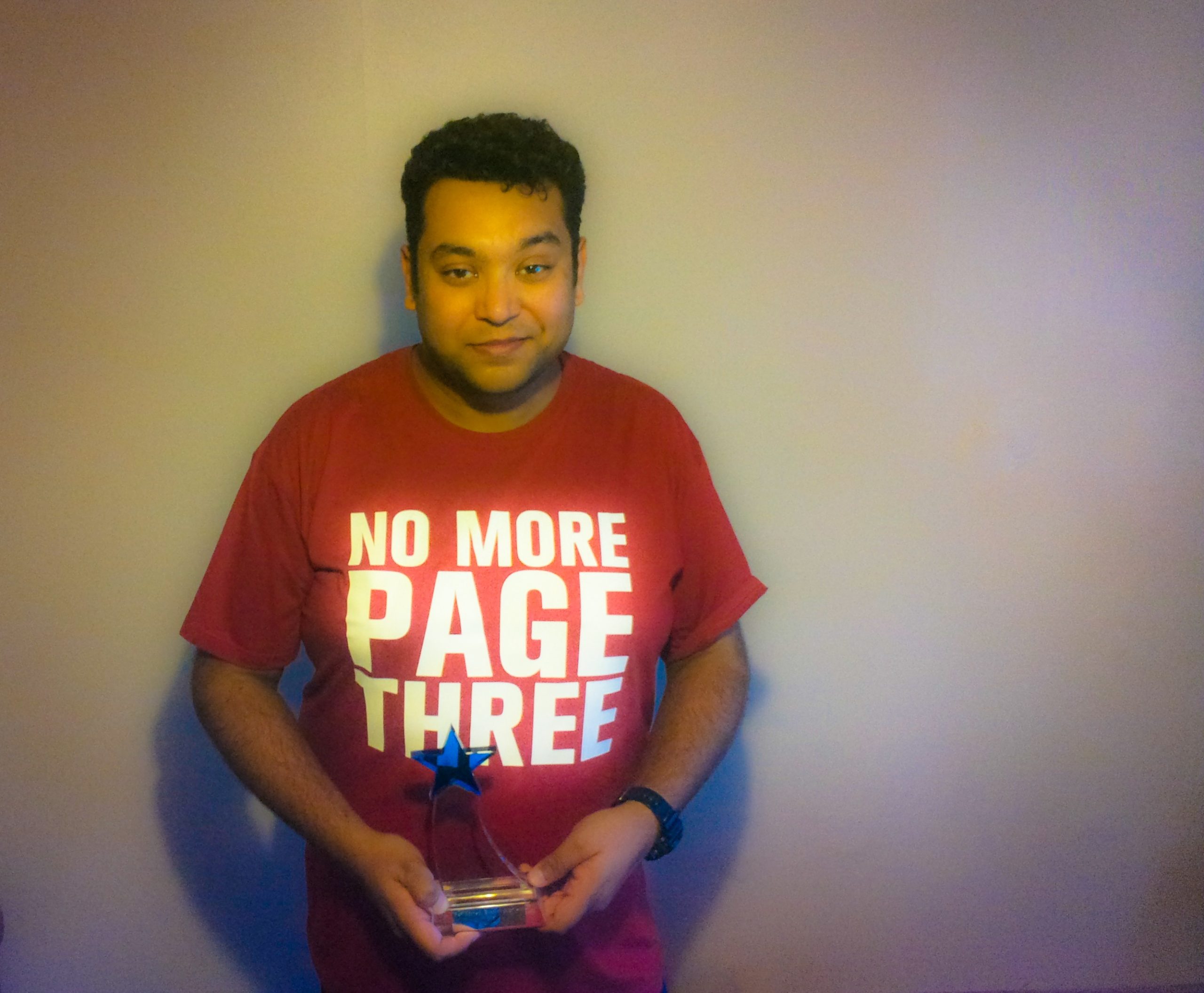 I Refuse To Be An ‘Ethnic Comedian’

I won an industry award last week: “Breakthrough Act Of The Year”. It certainly came as a shock given I’ve been performing standup comedy for less than a year. Don’t worry. It hasn’t gone to my head. I’m not deluded into thinking I’m the greatest comedian in the land. On the contrary, I wasn’t even the best comedian in the competition. With many of my co-finalists being better writers, sharper performers and wittier ad-libbers than I could ever hope to be.

However, last Friday, of the ten acts who made it through the gruelling heats and into the final, according to the audience and six judges, I outperformed my peers. It’s a big deal to me. It means a hell of a lot. Not just because I can add “award-winning comedian” to the CV, but because the awarding process was meritocratic, transparent and open to all qualifying non-professional comics.

More than a hundred comedians applied to the competition, and were whittled down to a top ten for the finalé. There were at least half a dozen comics in the room that night I really didn’t want to compete against, because I admire their talent and accomplishments, and fully expected to be bested. Beating the pre-eminent of my peers (in my “weight division”, as it were) meant something. But more and more comedy awards are springing up where you don’t need to beat the best, as many of your rivals are excluded for having the temerity to be white and/or male. I think that’s a joke, but not a particularly amusing one.

Modern comedy is a progressive and politically correct world – a fact that’s contributed to my being banned from more than a hundred venues in just the last ten months. I proudly wear those rejections as a badge of honour, but that’s just the tip of the Titanic-crusher when it comes to my disagreements with many in the industry. Perusing the résumés of other comedians, I see some boasting about recognition they’ve earned in gender or race-specific comedian competitions. Essentially, they’re “No White Men” Awards. And they’re awards I see as entirely worthless. As do – behind closed doors – many professionals to whom I’ve spoken in the past. A successful female headliner, in a pre-show greenroom chat with me, when asked what she thought of a “Funniest Female” prize being conferred snorted with derision and declared “that’s not a real award”.

It’s a sentiment I share. According to well-meaning progressives, I fall into multiple categories of marginalised groups who need recognition as such, and a (patronising) helping hand up the ladder. I refuse to be judged on anything but merit, which is why I’ve always resisted any attempt to pigeonhole me and rejected any effort to label me an “ethnic comedian”. The result? Unlike those who have played on gender/race guilt-driven sympathy by making a fuss – on and off stage – about their disenfranchisement, the industry recognises me as a “comedian” first and foremost. There may well be plenty of unflattering adjectives appended as well – “edgy”, “indignant”, “intolerable” and “hothead” being some of the most popular (of the publishable).

However, when I get booked to play a club I can be sure that I’m there because I’m trusted to deliver the laughs that keep the owners’ tills ringing. Not as an attempt to fulfill some unwritten quota intended to stave off accusations of aversion to diversity.

As your reputation as a comedian grows, it’s inevitable your ‘phone starts ringing more often, and in my early days most of the offers I got were related to my ethnicity. The short-term financial gain was tempting, but I took the decision that long-term I was better off turning down every Indian culture show, petro-Arab summer party, Asian radio station and Islamic TV channel that came knocking on my door.

I did violate this self-imposed rule once, and once was enough. Despite my reservations, a very influential comedy agent convinced me to perform at a show with a predominantly Indian subcontinent audience. It became clear early into the evening how creatively limited and lazy performing to minority crowds makes you. The more seasoned acts, who dealt with these audiences regularly, operated on the premise that shouting “Paki” plus any expletive constitutes a surefire punchline. (A “banker” in industry parlance.) I listened to one act recite the words to a popular Bollywood song in Hindi, before clownishly reading out a literal English translation in a faux-Indian accent that would make even the cast of It Ain’t Half Hot Mum cringe. The audience were mildly, and perhaps kindly, amused.

I’d wandered into a creative and cultural ghetto and, despite being the best-received comedian of the night, I couldn’t wait to get away from it. To me, writing and performing with the intent of pandering to a limited demographic with very specific cultural reference points is unappetising. I won’t be doing it again. And not just because they failed to pay me a penny of the agreed upon remuneration. Tight-fisted Paki Bastards! (See what I did there? Hilarious ain’t it?)

Of course, there’s no denying the demand for niche comedy. There will be certain experiences that resonate more with specific genders, ethnic groups, faith communities or sexualities. And it’s important that artists and performers use those experiences to enlighten and entertain. Our culture is enriched through their work.

However, setting up awards to recognise achievements by women or minority groups does a disservice to the gifted female and ethnic minority talents who are more than capable of competing with the crème de la crème of their chosen fields. Creating and handing out No White Men Awards is an insult to them, as it suggests you’ve judged they can’t compete with their white male colleagues. And I can assure you the best neither need nor want such well meaning, but ultimately patronising, “positive” discrimination.

I want to compete with the best, and either triumph or fail on merit. Whatever happens, I earned and deserved the outcome. But if you’re a female or ethnic minority act who enters or accepts recognition by any No White Men Award–giving competition, you are tacitly admitting you don’t think you’re good enough to deserve success on merit. Stop selling your own dignity down the river for valueless trinkets from those who infer you are intrinsically less capable because of your non-white man status.

Sure, the honour I’ve received recently isn’t particularly impressive in the grand scheme of things. It won’t guarantee me a chair on TV panel shows or assure me a sold-out theatre tour of the country. But it’s worth more than all the No White Men Awards put together. Because it was earned competing against an open field.