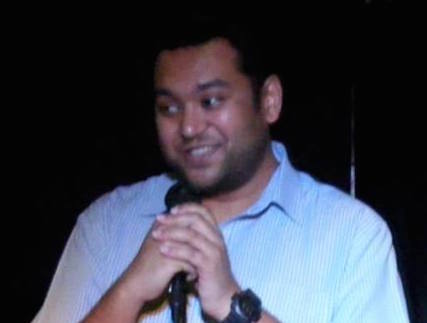 Do Comedy Courses Only Benefit Those Who Run Them?

Three months ago I attended a paid “workshop” in Bristol, which promised to help new comedians improve their chances of winning comedy competitions. One by one, more than a dozen of us got up and did seven minutes of material to each other, and were subsequently judged, X-Factor style, on our performances by a professional comedian and a left-wing comedy critic/booker.

I performed a routine savaging the racism and misogyny inherent in Indian culture, and the hypocrisy of the politically correct in their attitudes to those issues. #CulturalRelativism!

I got an instantaneous one-word review from the self-confessed Guardianista in response: “Yuck!”

The feedback that followed was, I have no doubt, well intentioned and sincerely believed, but unequivocally uncomplimentary about what I was trying to do. I was told that I’m obviously an intelligent guy, who could write comedy about any subject I liked. That I should use that ability to go back to the drawing board and produce material about something else. That challenging political correctness in the way I just did was immoral and didn’t belong on a comedy stage. And I was also told such a routine would never work in a comedy competition.

I smiled politely, and thanked them for their feedback.

Two weeks ago, in the same room, on the same stage, with exactly the same material, I won a comedy competition.

In fact, I won emphatically. And against some very good, much admired, and experienced acts.

It’s at this point lesser people – damaged, emotionally stunted and insecure people – are overcome with a desire to crow. To take a smug, self-satisfied swipe at those who told them it couldn’t be done. To bask in proving the critics wrong.

So that’s exactly what I’m going to do!

Just kidding. I’m far too comfortable with myself to bother making personal attacks on those who disagree with me. I’ve no doubt my comedy “tutors” meant well, even when their feedback bordered on devastating, dream-shattering and hostile – which it seemed to on occasion that June day. I didn’t mind as I personally preferred they deliver sincere criticism, rather than dishonest platitudes.

And it helps that I’ve been here before. I’ve done three comedy courses so far. At every single one, the people running those courses have told me the material I’m doing is too dark, too offensive, and too unpalatable for audiences to accept. That, at best, I would perform to uncomfortable silence and, at worst, face the ignominy of being booed off stage or even face physical attack!

None of these things have happened. I’m not pretending there haven’t been painful deaths or nights when I couldn’t wait for my stage time to end. But in the two years since I started performing there’s been no shortage of plaudits, and I’ve even (somehow) managed to wangle some paid work out of a couple of weekend clubs.

Now, in response, you might argue: “Surely, that just proves that comedy courses can and do work? Would you be where you are now if it wasn’t for those comedy courses?”

I think I would. Because everything I’ve done so far has been in spite of the advice I’ve gotten. Contrary to the comedy course guidance, the material I’ve produced has been true to my own vision, and often delivered a social and/or political message. Those messages haven’t always been appreciated or even understood on many occasions, but that’s always a danger when it comes to any art form.

Comedy courses, on the other hand, want to steer you away from danger. Instead, they advocate simple pandering to what (the comedy tutor thinks) audiences want to hear. You’re encouraged to be risk averse. “The last thing you want to do is say anything controversial, or upset even one member of the audience.” This, I’ve been repeatedly told, is the best way to progress up the comedy ladder. That may well be true.

But as “progression” isn’t really the end goal on my own particular journey, I’ve been free to chase my creative passions unfettered. And seeing things from that perspective has led to the strangest conclusion. Comedy courses are like Botox. They can make you superficially, and temporarily, more appealing to your audience, but cannot add any genuine substance to you and what you’re able to offer the world.

Now, I’m not suggesting those running comedy courses are being especially disingenuous. I’ve never met a comedy tutor who has ever claimed they are able to make you funny. Over and over again I’ve been told that it’s almost impossible to teach someone how to be hilarious. That the industry is much more meritocratic than almost any other. And that those who have the chops will “make it” eventually.

Of course, you’re given that pertinent piece of wisdom only after you’ve paid your money and started the lesson. Before the lesson, you’re told about the one or two current headline performers who happened to take the same course. Conveniently failing to mention the many hundreds, or perhaps thousands, who passed through the same doors, that would drive the success rate into fractions of one percent. But that’s basic marketing spin, and I’m hardly in a position to moralise about it.

So, if they can’t make you a good comedian, then what’s the point of comedy courses? I can only see two ways in which they’re useful:

For those who want to pursue standup comedy as an outlet for creative expression, however, they are essentially useless.

And even if you have more commercially driven aims, you don’t need to pay someone to teach you how to be a comedian. Get out there and jump on stage at a few open mic shows. If you’re capable (and not deluded) then you’ll quickly work out whether you have what it takes to achieve what you want in comedy. (Whatever that happens to be.) Record, review and critique your own performances, because almost no-one (except hardened pros) will give you honest feedback.

And remember: anything less than 15 seconds of laughter per minute is failure. Don’t delude yourself into thinking otherwise!